At the time of its incorporation as a city on July 16, 1963, Cotati already had a rich historical heritage.

Since before the birth of Christ, the fertile valley had been home of Coastal Miwoks, a clan of Native Americans who lived well on the nuts, grains and tubers, berries, fish and game that abounded in this temperate climate. The Indian name of their village, Kota'ti, produced the legend of Chief Cotati, whose visage is featured in the city's logo.

In 1827 the Kota'ti got an unwelcome look at their future when John Thomas Reed, a young Irish immigrant, came into their valley, built a cabin near Crane Creek and planted wheat. The native villagers, usually a peaceful group, resented this intrusion into their territory and burnt the cabin and fields. John Reed retreated to Marin County and subsequently became a prosperous mill owner. But the Kota'ti were not to enjoy their placid lifestyle much longer.

In 1837 the Mexican government established a system of land grants, including the 17,234-acre Rancho Cotate, which encompassed what is now Cotati, Rohnert Park and Penngrove. At that time the Sonoma County region marked the northernmost frontier of Mexican territory. The Mexican government was anxious to establish its hold on the area, since it was being eyed for takeover by several nations. Rancho Cotate was first awarded to Capt. Juan Castenada, but within a few years it was purchased by the California land-baron Thomas Larkin. In 1846 the Bear Flag Rebellion succeeded in displacing the Mexican domination of the region. The Bear Flaggers were primarily Anglo-Americans who did not want to sit by and wait for the British, French or Russian to wrest the lands from Mexican control. The original papers deeding the Rancho Cotate were lost in the takeover of the Sonoma fort.

Larkin subsequently sold the Rancho to Joseph Ruckle, who sold it to Dr. Thomas Page in 1849. It is Dr. Page and his family who must occupy center stage in any treatment of Cotati's past because of the length of time that they controlled the lands (1849 to 1929), and because of the indelible imprint they left upon the very shape of the town.

Thomas Stokes Page was born in 1815 in New Jersey, and graduated at 21 from the University of Pennsylvania medical school. Anxious to see the world and seek his fortune, Page wasted no time in boarding a cruise ship bound for Europe and then South America. For reasons that are not clear, he wound up settling in Valparaiso, Chile, establishing himself as a family man and physician. In Valparaiso he became friendly with the Atherton family, who convinced him to find an estate for himself in Northern California. To this end they introduced him to a Mr. Grogan, who acted as agent.

Although Page purchased Rancho Cotate in 1849, it would be another seven years until he received clear title to the land since the original deed had been lost. For nearly 80 years after that, the Page family controlled most of what was called Cotati Valley, the area covering the southern end of the Santa Rosa plain.

Dr. Page and most of the family members actually spent very little time living on the ranch. Two of the seven Page sons developed the land into a cattle and sheep concern, and until the early 1890's it remained largely unchanged. During these years, the two roads that connected Santa Rosa and Petaluma traversed the east and west boundaries of the ranch. The area was subject to annual flooding and much of the land remained marshlike the year round. This is why the two roads that were built avoided the most direct route, which is where today's Old Redwood Highway runs. What is now called Petaluma Hill Road was called simply The Hill Road, attesting to the fact that it was the high road to and from Santa Rosa. The road into and out of the Page ranch came off the "West Road," past the Washoe House (built in 1839).

The Page house and ranch buildings were built on the east end of an east-west ridge, no doubt to protect from the persistent westerly winds from the ocean. From this ridge, the Page house had a magnificent view of the Cotati Valley and the Sonoma Mountains to the east, north and south. At the center of the ranch buildings stood a large hexagonal barn which many believe to be the inspiration for the town's subsequent street plan.

During the period from 1849 to 1892, the most significant development for Cotati was the building of the railroad, which was completed in 1870. Not until 1892 would a town begin to gather around the wood and water stop known only as Page's Station, because when Dr. Page died in 1872, he provided in his will that the ranch would not be subdivided and sold until the youngest Page son reached the age of 25. In this way, Cotati became the last of the Sonoma County Ranchos to remain intact.

Finally, in 1892, the Cotati Land Company was formed by the Page family to subdivide and sell the vast ranch, and to transform Page's Station into a small town. To head up the marketing of the five, ten and twenty acre parcels, they hired David W Batchelor. Batchelor succeeded in selling over 900 tracts of land for the Page brothers, and also was a pioneer in the poultry business, which he is credited with introducing into the region.

By 1895 the county road was built between Santa Rosa and Petaluma, passing directly through the hexagonally laid-out heart of the new town. In 1909 this road would be incorporated into what was then called California Route One, running from San Francisco to Crescent City. It was this road, along with the train station, which opened up Cotati as a convenient place to stop for travelers. On February 13, 1894 the U.S. Post Office was installed, and by the turn of the century Page's Station had become a town named Cotati.

The construction of the center of the town in the hexagonal motif allowed the Page family to name each of the six peripheral streets after one of the seven Page sons. Wilfred, who supervised the project and who hired the surveyor, Newton Smyth, to lay it out, named a train station and another street to the north after himself. 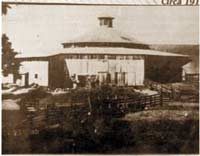 The exact source of the design for the city center remains a mystery, but there are at least two very good possibilities. First is that it was patterned after the hexagonal barn at the Page ranch, which in turn may have been built along lines that were in fashion at the time of its construction. Another possibility is that it was fashioned after the radiating star plan which is prevalent in the layout of many European cities, as well as Washington, D.C. and Detroit, Michigan. Whatever the reason for its design, it was deemed unique enough to gain State Historical Landmark status in 1973.