By the turn of the century, many parcels of Cotati land had been sold as small farms. The freight transportation offered by the railroad through town, the development of the new county road, and the sudden need for businesses serving a growing agricultural community, all combined to make Cotati something of a boom town. 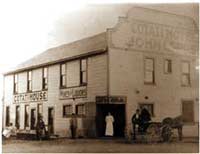 During the first decade of the century, churches, schools, meeting halls and homes by the score were built. By 1911, the town could boast that a thousand people had celebrated the Fourth of July there. Around the Plaza businesses sprang up, including the Cotati Hotel.

The November 1911 edition of The Northern Crown, a Petaluma journal, extolled the virtues of Cotati and its public-spirited inhabitants. The citizens of Cotati built and maintained their own public parks, built churches, schools and meeting halls. The trees they planted still stand. 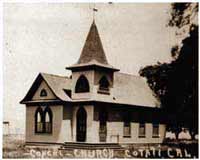 During the teens Cotati continued to grow. Automobile dealerships appeared in the 20's along with the need to establish a fire department. In the past Cotatians had banded together to fight their own fires or else relied on the Santa Rosa department. The combination of high winds and tinder-dry summertime grasses helped to make parts of Cotati subject to frequent grass-fires. In an area where everyone knew, or knew of everyone else, it was natural to join together in saving one another's property and, in some cases, lives. By 1927 the number of structures and the size of the area needing fire protection necessitated the organization of the Cotati Volunteer Fire Department.

Many of the men, and sons of men, who had helped one another spontaneously, now joined together in an organized way. The area the men protected was even larger than the current North Bay Fire Authority. In fact the need was so great and their performance so effective, that in 1935 the Volunteer Fire Department entered into a contract with the state, forming the Fire Protection District which still exists.

During the 30's and 40's, agriculture continued as the most important influence in the Cotati Valley, and the town changed more slowly. In the 40's and 50's, small family farms were having a hard time surviving, and some of Cotati's agricultural lands began to develop as residential and commercial areas. Opening of the 101 freeway in the mid-1950's made it feasible for San Francisco workers to commute to homes in Cotati.