Birth of a City

Incorporation will preserve the unity and pride of Cotati as well as its individuality. That was the heading on handbills urging voters to turn out at the polls on July 2, 1963. 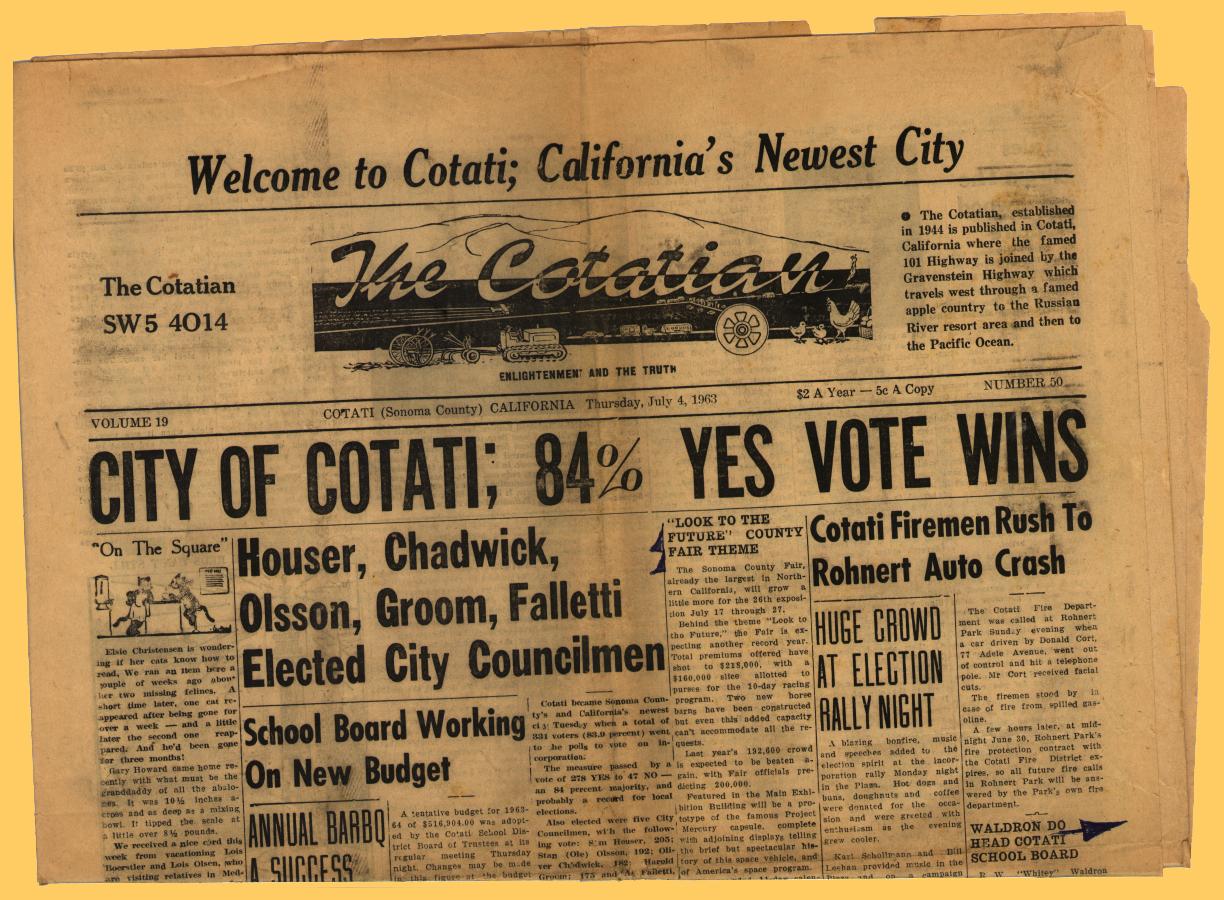 The town had developed by fits and starts since the turn of the century, and by the end of the 1950's had become a close knit community that clung fiercely to its claim of being "the Hub of Sonoma County." The Cotati Chamber of Commerce was well known throughout the Northbay Area for its vigor and enthusiasm. It had led a successful fight to get state approval of a local site for the new state college. The little town was proud to have its own water and sewer system and its top rated fire department. It seemed destined to continue its pattern of gradual growth, well insulated by green pastures from its metropolitan neighbors.

Then suddenly the seed fields north of town, for years noted mostly for their acres of sweetpeas in summer and pheasant hunts in wintertime, were sprouting houses, stores, schools - and lots of newcomers. Cotatians who at first had discounted Paul Golis' and Maurice Fredericks' plans for a city named Rohnert Park as a daydream woke up to the reality that a new and very progressive community was growing on their outskirts.

By the fall of 1961, citizens of semi-rural Cotati and infant Rohnert Park, discontented with the level of services provided by the county, were exploring the possibilities of merging their interests and incorporating as one city. A joint citizens' committee was formed, and a municipal expert, William Zion, was hired to conduct a feasibility study. By January 1962, however, a contingent in Rohnert Park had decided that a combined city wasn't to their liking, and filed notice of their intention to incorporate independently.

The election was held on August 21, 1962, and incorporation was approved. Rohnert Park was the name favored by 398 voters, while 128 diehards, still hoping that the neighboring communities might someday merge, voted to name the city Cotati Park.

Cotatians, having been studying incorporation, realized that sales tax provides much of a city's money, and theorized that Rohnert Park, with almost no businesses, would covet Cotati's approximately 100 commercial enterprises. Cities need utilities too, and Rohnert Park developers were threatening to sue for use of Cotati's sewage system, under terms of an agreement made years before with the Rohnert family. Worst of all from Cotati's point of view, incorporated cities had jurisdiction over development adjacent to their boundaries. It seemed inevitable that the new City of Rohnert Park would seek to extend its boundaries to take in the parts of Cotati that it found most desirable, gradually eradicating the close-knit pride-filled "Hub of Sonoma County."

Needing a legal description of the proposed boundaries, Dorfman tracked down a friend, Ned Harper, a title company official.

"It was a Sunday afternoon, and Ned was out on his boat" Dorfman remembers. "We got him by radio, explained the situation, and he agreed to write the description for us so we could file the petition in time."

On August 27, one day before Rohnert Park was to be officially declared a city, the Cotati committee filed its notice of intention to circulate incorporation petitions. Boundaries of the proposed city were roughly the same as the Cotati Public Utility District but extended farther out Gravenstein Highway and down East Cotati Avenue to include Sonoma State College, an extension later nullified by the state. Thirty-seven citizens signed the petition which Draper presented to the Board of Supervisors, stating that incorporation "seemed necessary to retain the character of the town, preserve its name and guide its future growth."

A month later, after a constant round of public meetings, fact-finding sessions and personal visits to property owners, the citizens' committee filed its official petition for incorporation. It was signed by 160 property owners representing an assessed value of $93,430 - almost twice the number and value required by state law.

Much credit for success of the drive for signatures was given to Sam Houser, a crusty old-timer known for his lack of reticence in stating his views.

"Having Sam working for incorporation gave us a big boost" Draper recalls. "The old-timers figured if Sam was for it, it must be o.k."

The desire for city status wasn't unanimous, however, and a group of citizens led by Bernhard Grutgen led a campaign to cancel the incorporation effort. However, they were able to recruit only 21% of the landowners, while state law required at least 51% for their petition to be accepted. Grutgen, accepting defeat became a candidate for city council.

As the campaign for incorporation proceeded through the winter and spring of 1963, Rohnert Park made good its threat and filed suit for excess capacity of Cotati's sewer plant adding impetus to Cotatians' fight for survival. Concern was also aroused by a new state law creating a Local Agency Formation Commission with powers to approve or disapprove proposals for city incorporations. It seemed clear to Cotatians that if they did not succeed in forming their city, they probably wouldn't get another chance.

"Keep Cotati!" became the cry, and meetings were held every week in the Cotati School auditorium (now City Hall). Fliers pointed out that "becoming a city would give Cotati home rule; a direct voice in determining the local pattern of living" and a way to supply services it needed instead of having to rely on the county. If incorporation failed, the handbills warned, annexation of parts of Cotati, a parcel at a time, to Rohnert Park was inevitable. Owners might be taxed for services they didn't need or want, and the Cotati Fire Department could lose its effectiveness because of a loss of property tax revenue.

A proposed city budget listed expected income of $33,591, produced mostly by sales tax, liquor licenses and vehicle registrations. That income, it was estimated, would be enough to run the city, take over road maintenance from the county, and give four hours a day of police protection, twice as much as the county was providing.

For Cotati it's now or never! the fliers proclaimed.

A week after the election, Cotati was certified as Sonoma County's newest city, and the council began conducting its business in the anteroom of Ed Lewitter's accounting office. Public meetings were held at the fire station.

One of the council's first actions, on August 1, was to refuse salaries, stating that Cotati had been planned as a low-budget city with volunteer workers, and the councilmen were sticking by their plans.

"None of us wanted public office," Mayor Houser told a newspaper reporter. "We just wanted to keep Cotati the way it was."